Harriet Jacobs was born into slavery in North Carolina. Her single work, “Incidents in the Life of a Slave Girl,” published in 1861 under the pseudonym Linda Brent, and edited by famed Abolitionist Lydia Maria Child, was one of the first autobiographical narratives about the struggle for freedom by an African American woman. Today, her book is compared with the “Diary of Anne Frank” as being two of the most important autobiographies depicting the resiliency of young women during times of great struggle.  During the years leading up to the Civil War, she became an Abolitionist and national speaker to end slavery.

On May 14, 1865 Jacobs, in the company of her daughter Louisa and several Northern women Abolitionists, left Washington, DC to travel to Richmond, Virginia to see first-hand the fallen rebel capital.  Richmond at that time was a city in ruins. The former Confederate capital had fallen to advancing Federal troops a month earlier and during the confusion a fire was set among the many tobacco warehouses and nearly one third of the city was in flames. As Confederates and whites fled the city, former slaves came forward to rejoice and publically proclaim their new found freedom. Within the month, Richmond was under martial law and Northern officials poured into the city to set up the Bureau of Refugees, Freedmen, and Abandoned Lands to oversee the transition of enslaved African Americans to full citizenship.

In Jacobs diary she notes, “We have nothing to complain of and much to be thankful for.” During their visit to Richmond they toured the Libby Prison, the former Lumpkin’s Jail were slaves were bought and sold, and embarked on a tour of the former Whitehouse of the Confederacy. Later they stop to rest and pay a visit and take tea with the Forrester family, who lived around the corner from the Confederate Whitehouse. Jacobs would remark how much she and her companions enjoyed “spooning strawberries and ice-cream from the saucers of the former Jefferson Davis.” A highly interesting concoction of edible delicacies in a city that had endured four long years of food shortages and near-starvation of population both free and slave. 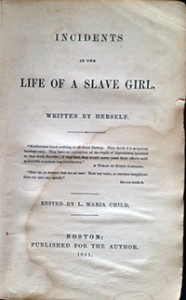 The Forrester family that entertained Harriet Jacobs and her party were Richard Gustavus and his wife Narcissa Forrester. Their spacious home located at the corners of College and Marshall Streets sat directly across the street from the Medical College of Virginia and around the corner from the former Whitehouse of the Confederacy. Their son Richard Gill Forrester would be the first man to raise the Union flag back over the fallen Confederate Capital building one month earlier on April 3, 1865 and Richard Gustavus would go on to become the first man of color to serve on both the Richmond City Council and School board.

Today, a material reminder and rare keepsake of that visit between Harriet Jacobs and the Forrester family is an original 1861 printing of Jacob’s famous “Incidents in the Life of a Slave Girl” book in the Keith Stokes Family collection.