“Americans are so enamored of equality that they would rather be equal in slavery than unequal in freedom.”

In Richmond in 1822, youthful Gustavus Myers son of Samuel and Judith Hays Myers, and nephew to Catherine and Slowey Hays, and first cousin (once removed) to Judah Touro, fathered a son with Nelly Forrester, a “Free Woman of Color” living and working in his uncle Moses Mears Myers family household. The boy was given his father’s name as a middle name and his mother’s last name, Richard Gustavus Forrester. In 1836 will (largest by any woman in the South at that time) of Slowey Hays, she leaves a sum of money in the name of Richard Forrester, son of Nelly. Gustavus Myers would later become the most prominent Jewish citizen in the city of his day. An accomplished attorney, founding member of the Virginia Historical Society, President of the Richmond Masonic Lodge, he wrote plays and poetry, and served twenty-eight years on the Richmond City Council, twelve of which as Council President. During the Civil War, he would serve as the Confederate government’s Consul to Great Britain. At war’s end, he became one of the men to negotiate the surrender of Richmond with Abraham Lincoln and post the bond to free Confederate President Jefferson Davis. He was also a close friend and confidant of the Jewish Judah Benjamin, Secretary of War for the Confederacy. Although Gustavus later married and had a white son, his commitment to his son of color did not end. He died in 1869 and his obituary boasted that, “He was one of the most useful men of the city.”

The Matriarch of the Forrester Family, and the first person of color, Nelly is living her remaining years with unmarried sisters Harriet, Julia and Catherine Myers.  In the 1870 census they are living together in Richmond with Nelly listed as age 70.  On March 24, 1873, Nelly Forrester at 73 dies after a short illness. In one of her obituaries she is remembered as “Well known and highly respected. Her faithful services are remembered and truly valued by the family with whom she had lived from early childhood to her 73rd year.” Her funeral was held with a large crowd attending at the historic First African Church in Richmond. 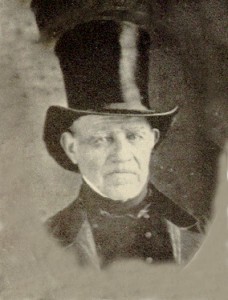 In New Orleans, Judah Touro extended his commitment to slaves and free persons of color to include personal friends and relationships. He provided for the housing and financial interests of a free woman of color, Ellen Wilson. This relationship in particular would play

a major role in forming the Forrester family of Richmond. While lawfully recognized unions between whites and persons of color were prohibited at the time, many common law relations were recognized through the “Plaçage” relationship system in which white men of means entered into formal relationships with women of African, Indian and Mulatto heritage. This system was so ingrained into New Orleans’s social traditions, Quadroon Balls would be held where white men could formally meet and mix with women of color. In New Orleans in the early 19th century, Judah Touro would meet a young woman of color named Ellen Wilson and a daughter named Narcissa would be born. Family history has Narcissa as a very young child sent to Richmond around 1830 to be cared for by his devoted cousin Catherine, where the girl would be closer to family and a larger Jewish community. At the time of Judah Touro’s death in 1854, he leaves a sum of money and a home for Ellen in New Orleans.